On the occasion of a solo exhibition of Katherine Umsted’s recent sculpture and works on paper at the studio of Kylie Heidenheimer. Friday, July 31st through Sunday, August 1st, 2015

You mentioned the Sandy Hook shootings and children's spirits rising to the heavens in connection with your new work. The pieces are made from children’s clothing and airily suspend from the ceiling. Your earlier BREAST PLATE, SHIELDS and ARMOR works are about protection and vulnerability. These concerns certainly apply here. Is it possible to elaborate on their specific roles in these works? Were they primary motivations in the making of the pieces?

Yes, motivations for this work still comes from those places. The ARMOR series is about the futility of efforts we take to protect ourselves from death. It is made out of stupid materials; paper, ribbon strips, plaster and gauze. These things are not going to protect anyone. Additionally, the metal hardware shows a tough outer appearance, but has sharp, dangerous elements facing inward toward the wearer.

The BREAST PLATE and CHAIN MAIL DRESS series were created using mannequins. Accordingly, I see the pieces in part as being about archetypes and symbols and the roles that we give them. The current work does not seem to build on these kinds of elements. It also does not seem to reflect the polar tact of your TIARA series where you place finished wire works in the middle of Broadway in order for trucks to flatten them! Can you describe what led to this current direction? It seems to be about neither establishing or smashing symbols and archetypes.

I think of the current work as oscillating back and forth between the personal and the general. The Tiaras are in a way, related to the clothing pieces. When I first started making the Tiaras, I was thinking about little girls fantasizing that they were princesses. Reality then knocks the tiaras off their heads. The Breast Plates were as you say, formed on mannequins. No way was I going to use my body! Initially they were whole, but later pieces were cut open. The most recent Shields, which have targets on the front, are totally beaten up. But on the inside, there is fluffy pink or lavender fabric. With the Chain Mail dresses I originally made them with my body in mind, and they were meant to hang flat. They were small shapeless rectangles at first, so I kept tweaking the pattern until I got a sexy, girly outline. They end up as “come hither” but ready for danger. And, again, the “chain mail” is not actually joined metal rings but pink or lavender curling ribbon that is sprayed with silver paint.

Again, with the new work seeming to minimize prototypes, does that indicate a move away from what might be considered a focus on traits of humanity? And toward a greater concern with the personal or political?

I think the new work is more personal. The landscape drawings are of a place where I lived as a kid. I went back a few years ago, and absolutely all signs of human life on our family’s farm were gone. The house and barns were razed and nature had reclaimed everything. I think of my watercolor target pieces as bruises. They are hung vertically and mirror the shape of a torso. Politically speaking, I think when I believe I am making things from a personal standpoint, they in turn mirror our vulnerable place in the world, as a country and as humans, politically and environmentally. 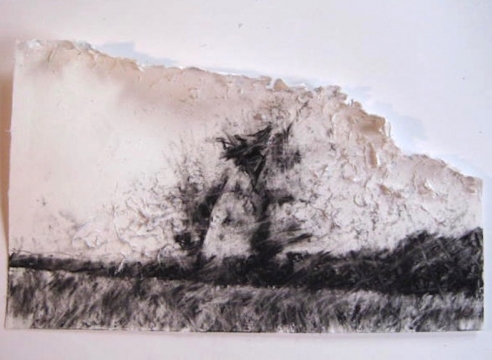