Tanja Grunert Gallery in pleased to announce Anouche 6 to 7, an exhibition of new works by Klemens Gasser. Anouche 6 to 7 is the artist's fifth solo exhibition at the gallery, and will feature a video installation, 5 large photographs, and two distinct yet related series of paintings. Anouche 6 to 7 will be on view from Thursday February 23 through Saturday April 15, with an opening reception on Thursday February 23rd from 6-8 p.m.  The exhibition is accompanied by the publication of an artist book which features an essay by Ara H. Merjian entitled “Anouche Through The Looking Glass” and a short story by Anouche Wise entitled “Cinder Girl”.

“I leave you free to imagine any dialogue you please. Choose whatever may charm you. Have it, if you like, that they hear the voice of the blood, or that they fall in love at first sight... Conceive the wildest improbabilities. Have it that the depths of their beings are thrilled at accosting each other in slang. Tangle them suddenly in a swift embrace or a brotherly kiss. Do whatever you like.” ― Jean Genet

Klemens Gasser’s exhibition takes its name from the title of the main video installation. The central feature of the exhibition, the video depicts a female protagonist, Anouche, standing nude directly in front of a camera lens. Anouche struggles to stand still and remain focused, her eyes slighting trembling in silence. The effort of remaining physically still becomes more challenging with time, leaving Anouche both mentally and physically exhausted in a trance-like state. She stands quietly for the duration of an hour and eight minutes until the camera card is completely full. The resulting film has no narrative, it is void of dialogue. Anouche stands in complete solitude, breathing in gentle and heavy intervals, light sounds from the street interject occasionally breaking the atmospheric hush of muffled white noise. There is action within the stillness, an authentic revelation in focus and meditation. Her frontal stance directly confronts thening Reception: February 23, 6-8 p.m.viewer as she stares straight ahead. Temporality is captured with a slight fading of light. It is a torturous act to stand still for such a long period of time, a ‘tortuous struggle’ that Gasser insists to partake in as he himself stands behind the camera lens for the works entire duration, as an active witness, recorder, an objectify-er. Sadomasochistic in execution, the brutality here is two fold; as Anouche suffers in front of the cameras lens, so does Gasser from behind.

With this new work, Gasser’s interest lays within filmmaking itself and its ability as a medium to capture reality and existence, which Gasser utilizes to capture and identify what for him would culminate in ‘the most authentic moment’. For Gasser, film is the truest way of showing a person. Deliberately avoiding narrative, Gasser strives to elucidate exactly what life is—the un-important moments, the moments of just being, the fragility, this is Gasser’s authentic moment; Anouche stands in for human existence. The video work is accompanied by 5 large photographic film stills, photographs that portray Gasser’s moment of ‘authentic truthfulness’. In conjunction with the video, the series as a whole contains evident sexual connotations, as does much of Gasser’s oeuvre. Gasser work largely touches on sadomasochism and themes of the archaic, the primitive and expressive existentialism, themes that are further investigated through his erotic paintings.

Sexuality has been a focal lens in much of Gasser’s artistic practice; he often explores his existential themes through an overtly sexual and erotic world. An earlier body of work that comes to mind here are his series of ‘Masturbation Paintings,’ which are literally that. In his new series of paintings made for the occasion of this exhibition, Gasser revisits his ‘Latex Paintings’, this time using pink as his primary color to capture imprints of the female body. While performative in process, there is a certain sense of tactility to Gasser’s Latex Paintings; the works highlight contact and touch, in addition to their residual function of documentation. The Latex Paintings are juxtaposed with a series of ‘Whip Paintings’, which capture the raw gestural mark-making of an exceptionally rough whipping action. It is important here to stress, that the canvas is hit and handled so incredibly hard by the artist that if it were a human body the lashes would break and tear open the skin. The sadomasochistic characteristics of these Whip Paintings recall the writings of Jean Genet on violence and brutality, as they deal with exactly that: the white man, the abuse of power, the violence and the creation of fear and terror, the punishment.

The fundamental reality portrayed through the struggle of both protagonist and antagonist is the ‘authentic moment’ depicted in Anouche 6 to 7, which recalls René Girard’s ‘mimetic character of desire’—a form of desire in which as soon as the desire is more than a simple need, “all desire is a desire to be”. With passion and urgency, Gasser’s work presents us with exactly that. The existential quest begins with the living, breathing, thinking human subject whose primary virtue is freedom and authenticity. Anouche’s stance, her struggle, her silence, her confrontation and the look on her face carries the so-called ‘existential attitude,’ of disorientation, confusion or dread in the face of an apparently meaningless or absurd world. Similarly, Gasser’s work confronts its viewer with this same attitude…I could not think of a more relevant socio-political climate for its display. 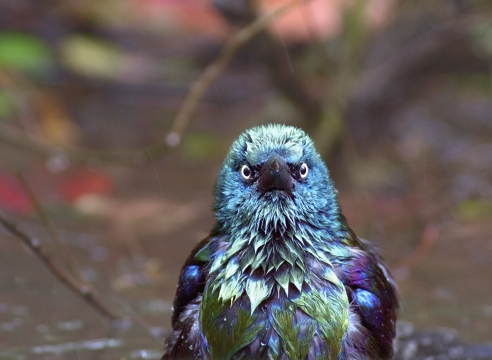