There is an aura of displacement, indirection and obliquity in Michael Alan’s paintings. Jagged, twisted and delicate lines come together to formulate distorted representations. Dysmorphic forms with splashes of color. Twisted, squiggly, yet instantly communicative and harmonious. Intrinsically, Alan’s marks are equations, a language of its own. An evocation of gesture and expression, they capture movement that is ever so changing. Like a message in a bottle, they are timeless records of sound and energy as Alan states, “I’m not interested in creating images, I’m interested in the documentation of the living.” Immortal Equations presents a selection of such living documentations, which will then be transformed into the backdrop for The Living Installation.

Echoing his attempt to capture the living, Alan’s performative work is “living art” in and of itself. The Living Installation brings Alan’s drawings to life; it replaces the line with flesh, transforming participants into human sculptures. A happening, a draw-a-thon, a spectacle, a complete overload of the senses, a total synesthesia, a beautiful mess. Both theatrical and raw, peaceful and chaotic, sane and insane, the outcome is always unknown. Unpredictable by nature, Dadaist in its origin and based on the fundamentals of DIY, The Living Installation invites the audience to collaborate, to create, or just to be…

Live Music by: Michael Alan Alien and Tim Love LEE with collaborations with The Residents, Renaldo and the loaf, Ariel Pink, Merideth Monk, Jello Biafra, Tommy Ramone and many more.

The Living Installation is by admission only. For tickets, please visit www.michaelalanart.com under ‘Installation’ – a 50-person capacity, get your ticket soon!

Michael Alan was born in 1977, in Bushwick, New York.  His work has been the subject of 9 solo exhibitions in New York, and has been included in over 200 group exhibitions both nationally and internationally. In addition to his work as a multi-media artist, Michael is the founder and director of the Living Installation, where human beings are transformed into unique, living art objects. These happenings are set to Alan’s original music, which is recorded featuring artists such as The Residents, Tommy Ramone, Ariel Pink, and Meredith Monk. The main goal of the project is reinforcing that humans are living installations by creating a space for people to open up, come together and are all equal through the process of creating art. 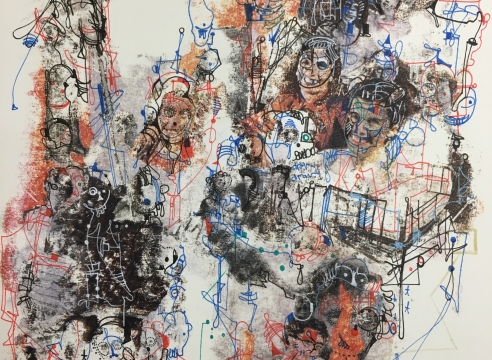