Tanja Grunert is pleased to announce an exhibition of abstract paintings by American artist Sharon Brant. Spanning almost fifty years, Brant’s life in art has always been at the forefront of progressive notions such as art as a political force that included women. The purity of the interactive experience and quality of art, without the diluting influence of the market, or “the Establishment”, was a major goal of the MUSEUM that Brant founded in1968 with 7 other artists, 3 years after graduating from Kansas City Art Institute and moving to NYC. MUSEUM operated until 1971.

The current exhibition at Tanja Grunert features hard edge, geometric, reductive paintings which Brant has created in the last few years. Painted on linen in a rectangular format, the works are beautiful and refined. In Stephen Westfall’s monograph on Brant he wrote: “Brant’s paintings are beautifully crafted presences in a severely abstract idiom. They ‘depict’ nothing but what they are. Nevertheless, they set in motion with poetic concision an interplay between the three conceptual spaces that painting must possess.”

Brant’s work has been exhibited worldwide in galleries and museums such as PS1 MoMA, the Aldrich Contemporary Art Museum and Instituto de Artes Graficas de Oaxaca. As a member of A.I.R. Gallery from 1989-1996, another artist run space in NYC, only for women, Brant’s work continued to evolve its pure aesthetic she had been developing since moving to NYC in the 1960s.

Brant has garnered press in newspapers and magazines such as The New York Times, Artnews and Artforum. In 2012, Brant was awarded a grant from the Adolph and Esther Gottlieb Foundation.

An exhibition of new reductive abstract paintings by NYC artists including Brant’s work will open at Minus Space in Brooklyn June 4. 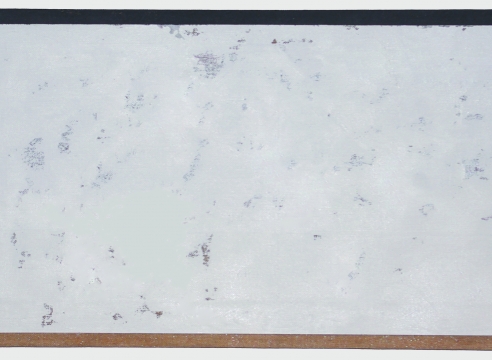