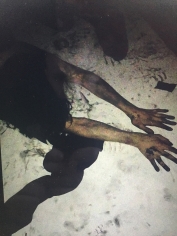 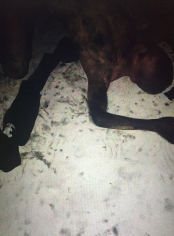 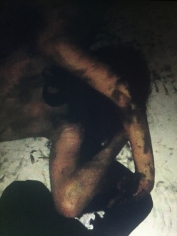 “What happened that night?” ask Margaret Velvet and Laura Duvall, known collectively as THE CORP. With their first two-person gallery exhibition, these instigators of movement dare to take you there. “DEATH” is centered around the feral, fleeting vignettes of one pungent night in their studio livid with touch and texture. Flipping traditional narrative process on its head, the artists used security footage of this one interaction to extract a series of eighty-nine printed stills and develop their performance. The audio was recorded raw from a live jam by Cody Youmans (aka Alien Sex Tape), and snippets of conversation flow throughout. The purposefully ungrounded images show limbs entangled, both violent and loose, enshrouded in dirty shadows. Their imagery and words allude to the kind of night when sleep is not a guarantee, hinged on a desperate clawing for connection with the body and mind physically before you. “It’s a game. It’s toxic. But you shared something.”

“DEATH” is THE CORP’s effort to reveal intimacy outside of the frame of gender worn in daily life, distilled through the rawness of vulnerable private interactions. By disposing with formality between viewer and artist, the work brings the audience directly into the painful uncertainty of negotiating the body and gender roles in real life, themes that THE CORP does not interpret abstractly. “Everything is unedited,” the artists insist, instead selecting poignant moments from deliberate, obsessive self- recordings. The content is real life channeled through poetry, written and performed: as gender non-conforming, Duvall and Velvet are both faced with negotiating their identity through their bodies on a daily basis, compelling them to elevate this struggle into critical discourse. In this there is rebirth, but also sharp dissonance. The abjection of a swirling New York night is an apt lens for this exploration, all too familiar as an archetype, yet forever dripping with allure. The atmosphere of the images and audiovisual works is drenched in fear, which is confronted with both softness and aggression, rather than politely shelved. THE CORP gives their bodies over to possession, whatever the results may entail.

“DEATH” is framed as something one experiences over and over in this exhibition, with every separation of the self from the body. THE CORP demands the isolation of the body as corporeal, divorced from the constructs of gender, sex, and anatomy. In an era when gender issues are finally breaching the mainstream media conversation, these artists brave the helm by making their own bodies the weapon and the battleground, beckoning the viewer to follow.