The title of the exhibition comes from the Greek word Metanoia, which has various meanings: meta (=after/post or beyond) + noia, which comes from the Greek nous (=mind) and refers to something post-logical, beyond reason. In modern Greek the word has come to mean “redemption”, which implies a religious meaning. Included in this exhibition will be one of EXPORT’s early performance videos, “Man & Woman & Animal” (1970-73) which looks into the religious and historical construction of gender, its dualisms and ecclesiastical power mechanisms. Noted video works such as “Cuts/Elements of Observation” (1973), “Hyperbulia” (1973) and “Syntagma” (1983) alongside some video poems accentuate EXPORT’S experimental language of video and performance art.

Being a pioneer of conceptual media art, EXPORT's work explores feminist theories and challenges social and political topics. Working across media in body performances, video installations, and expanded cinema, her early guerilla performances have attained an iconic status in feminist art history. She provoked thought about the passive role of women in cinema and confrontation of the private nature of sexuality with the public venues of her performances. METANOIA is an extension of EXPORT’s active engagement with feminism and her desire to experiment in different languages, incorporating body language, structuralism and sexual politics

VALIE EXPORT is an Austrian-based artist. Her work since 1968 comprises video environments, digital photography, installations, body performances, feature films, experimental films, documentaries, expanded cinema, conceptual photography, body-material interactions, persona performances, laser installations, objects, sculptures, texts on contemporary art history and feminism. VALIE EXPORT is one of the most important international pioneers of conceptual media, performance art and film. In 1967, she changed her name to VALIE EXPORT. VALIE was a nickname in her youth and she chose EXPORT in order to export her ideas to the world. Her first art object was the Smart EXPORT cigarette pack where she replaced Smart with VALIE. Instead of the globe, is a self-portrait of VALIE.  This cigarette pack is now in the collection of The Museum of Modern Art, New York.

"Through the combination of these elements, EXPORT’s work conveys an intellectuality that can dedicate itself to the highest levels of reflection on semiotic systems, sociological models, representational strategies, mechanisms of power and societal norms, and at the same time cover the subject of a woman’s delight in her own body while bathing (“Man & Woman & Animal” of 1973) with the same degree of devotion and irony." - Johanna Schwanberg 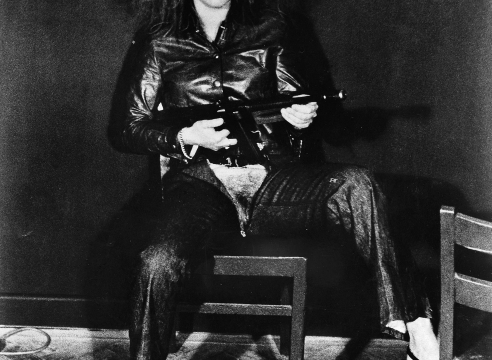